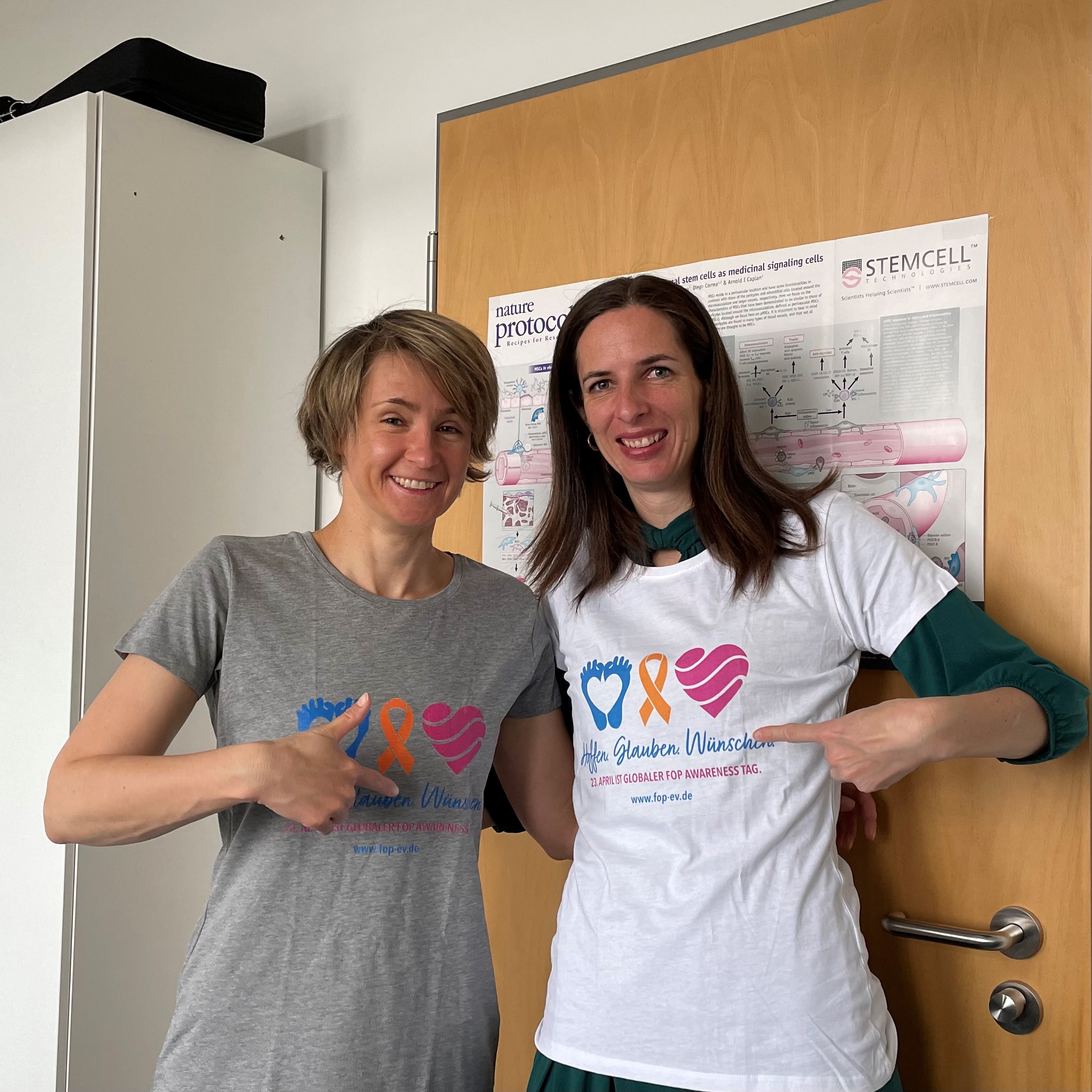 Fibrodysplasia Ossificans Progressiva (FOP) is an ultra-rare severely disabling genetic disease affecting 1 in 1.5 million people. It is characterized by excessive heterotopic ossification that progressively limits movement. Patients suffer from malformed big toes and bone formation in muscles, tendons, ligaments and other connective tissues. FOP results from mutations in the ACVR1 gene, which encodes for the BMP type I receptor ALK2. These mutations lead to hyper-responsiveness of this receptor to various ligands of the TGFb/BMP superfamily.

Martina Rauner and Ulrike Baschant, two scientists from the Bone Lab Dresden, are trying to find new therapeutic approaches to abrogate heterotopic ossification. To support the FOP community, they are also wearing T-shirts to raise awareness for the 2022 Global FOP Awareness Day.

For more information and if you wish to support the FOP community, too, please visit: https://www.ifopa.org/2022_global_awareness_day

Hope. Believe. Wish. for a future without FOP. 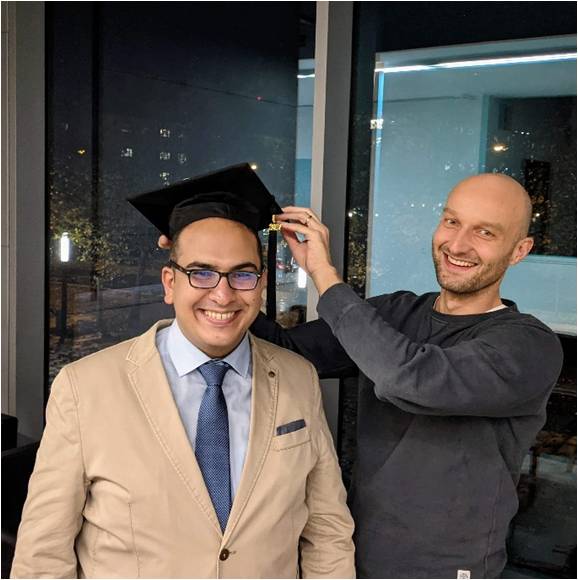 For his doctoral studies in the field of endocrinology, Manuel investigated the interaction between glucocorticoid signaling and the sympathetic nervous system in both the skeleton and the adipose tissue.

To that end, he used two methods to activate the adaptive thermogenic capacity in mice: long-term cold acclimatization and a chronic administration of a β3-AR agonist. He demonstrated that activation of the beta-adrenergic system either with long-term cold acclimation or pharmacological β3-AR activation prevented the onset of glucocorticoid-induced adipose dysfunction and related metabolic comorbidities. Thus, targeting β3-AR may be regarded as a potential therapeutic strategy to prevent glucocorticoid-induced metabolic disease.

Manuel will continue working as a postdoc in Holger Henneicke’s lab focusing on the interaction between glucocorticoids and IL4 in skeletal biology at the CRTD in Dresden.

Keep up the good work, Manuel! 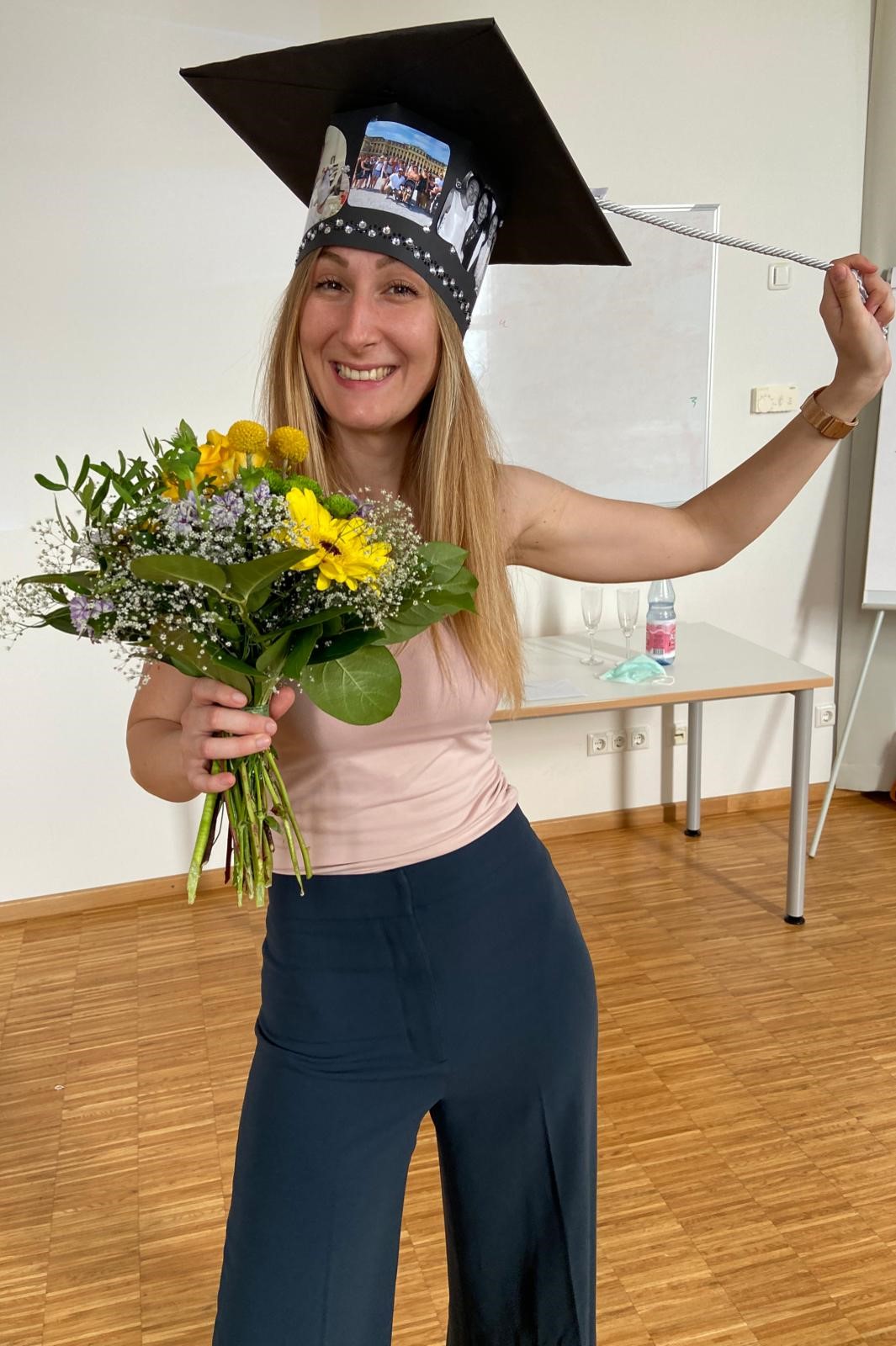 For her doctoral studies in the osteooncology field, Giulia focused on the role of extracellular vesicles in bone-prostate cancer cell crosstalk.

Her research emphasizes the importance of tumor-derived extracellular vesicles in intercellular communication and underlines their impact on altering the physiological behavior of distant target cells, specifically osteoblasts. Moreover, Giulia’s results suggest that uptake of PCa-derived exosomal miRNAs by osteoblasts might contribute to the formation of metastatic bone lesions. This project would have not been possible without the successful collaboration within the µBONE consortium. As her next career step, Giulia will join the lab of Professor Roberta Faccio, Washington University School of Medicine, St. Louis, USA, as a postdoc in September 2021. We are so proud of her and wish her all the best for her future scientific career!

Congratulations to Maria Ledesma Colunga and Giulia Furesi on their great achievements at the ECTS Digital Congress 2021!Sylvia Thiele2021-05-17T14:01:45+02:00 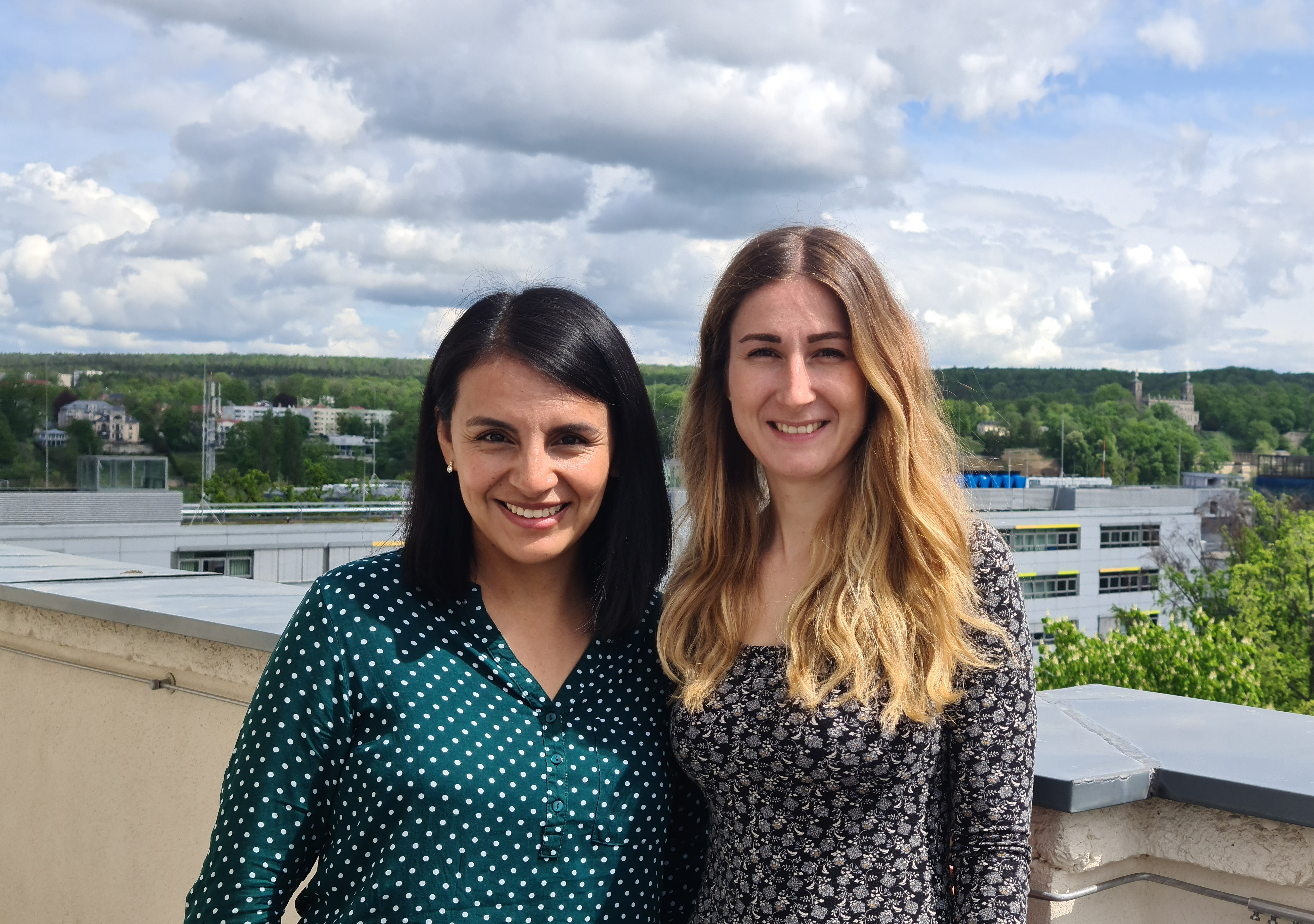 Congratulations to Maria Ledesma Colunga and Giulia Furesi on their great achievements at the ECTS Digital Congress 2021!

Giulia Furesi and Maria Ledesma Colunga, both young scientists from the Dresden Bone Lab, received the opportunity to present their research on the ECTS Digital Congress 2021 in form of an oral presentation.

Giulia Furesi presented her PhD thesis work in the osteooncology field as an oral presentation in the basic/translational session: Cancer, Regeneration and Stem Cells with the title: “Extracellular vesicles from metastatic prostate cancer modulate osteoblastic functions”. Her abstract has been selected for the ECTS Travel Award.

We are proud of having such highly motivated and ambitious young scientists in our Bone Lab! 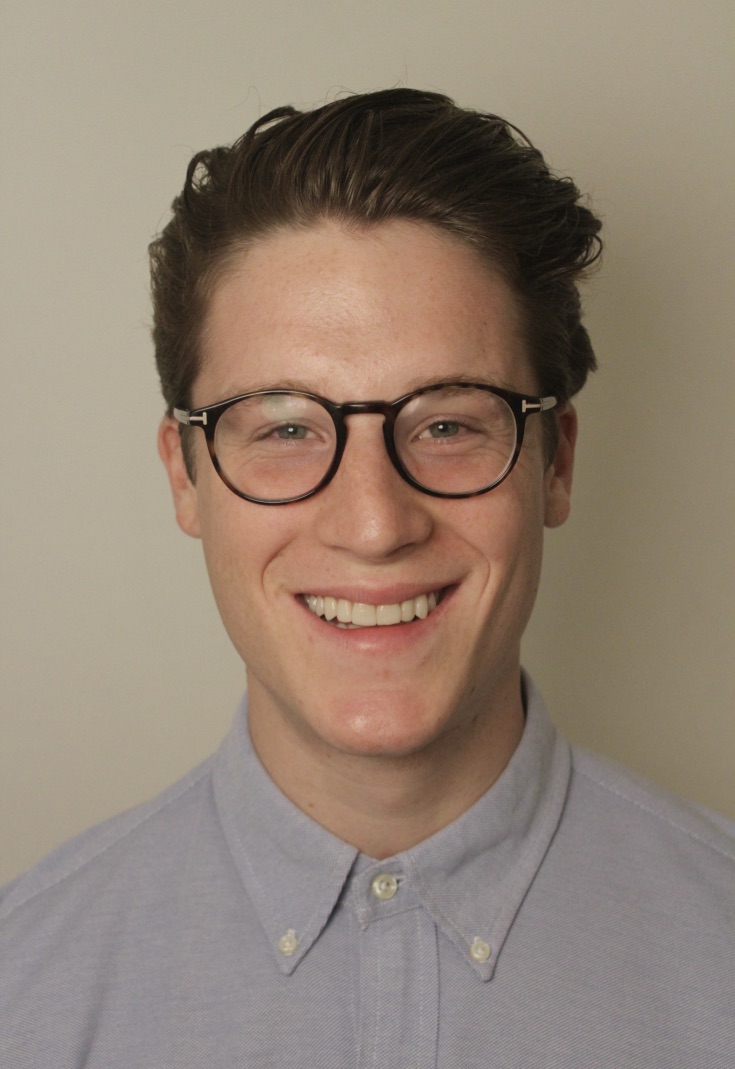 Last week, we received the wonderful news that the FOP Association in Germany (www.fop-ev.de), a patient organization, will support research in the Bone Lab Dresden that is connected to heterotopic ossification and FOP. Receiving such a generous gift from FOP eV is a tremendous honor and highly motivating! We are delighted to have the support from such an active patient group!

FOP is an ultra-rare disease that is characterized by excessive heterotopic ossification that progressively limits movement. All patients with FOP have a characteristic malformation of the great toe, thus, rendering this malformation a diagnostic criterion for the disease. FOP results from mutations in the ACVR1 gene, which encodes for the BMP type I receptor ALK2. These mutations lead to hyper-responsiveness of this receptor to various ligands of the TGFb/BMP superfamily. The Bone Lab has recently discovered the potential of Tfr2-ECD to limit heterotopic ossification in mouse models by scavenging these ligands. Future research, also supported by the Eva Luise and Horst Köhler Foundation for Rare Diseases, will investigate if this treatment also has potential to reduce ossifications in FOP.

The Bone Lab is dedicated not only to contribute to identifying novel disease mechanisms and/or therapeutic options for FOP, but also to raise awareness for this rare disease. As such, we recently participated in the ECTS Charity Run (https://www.ects2020.org/mediaroom/ects-ects-academy-charity-event-run-for-fop/), which raised funds for FOP France, and won the category for “Best Map”. We hope that with leaving this Foot print, people will be made aware of FOP. 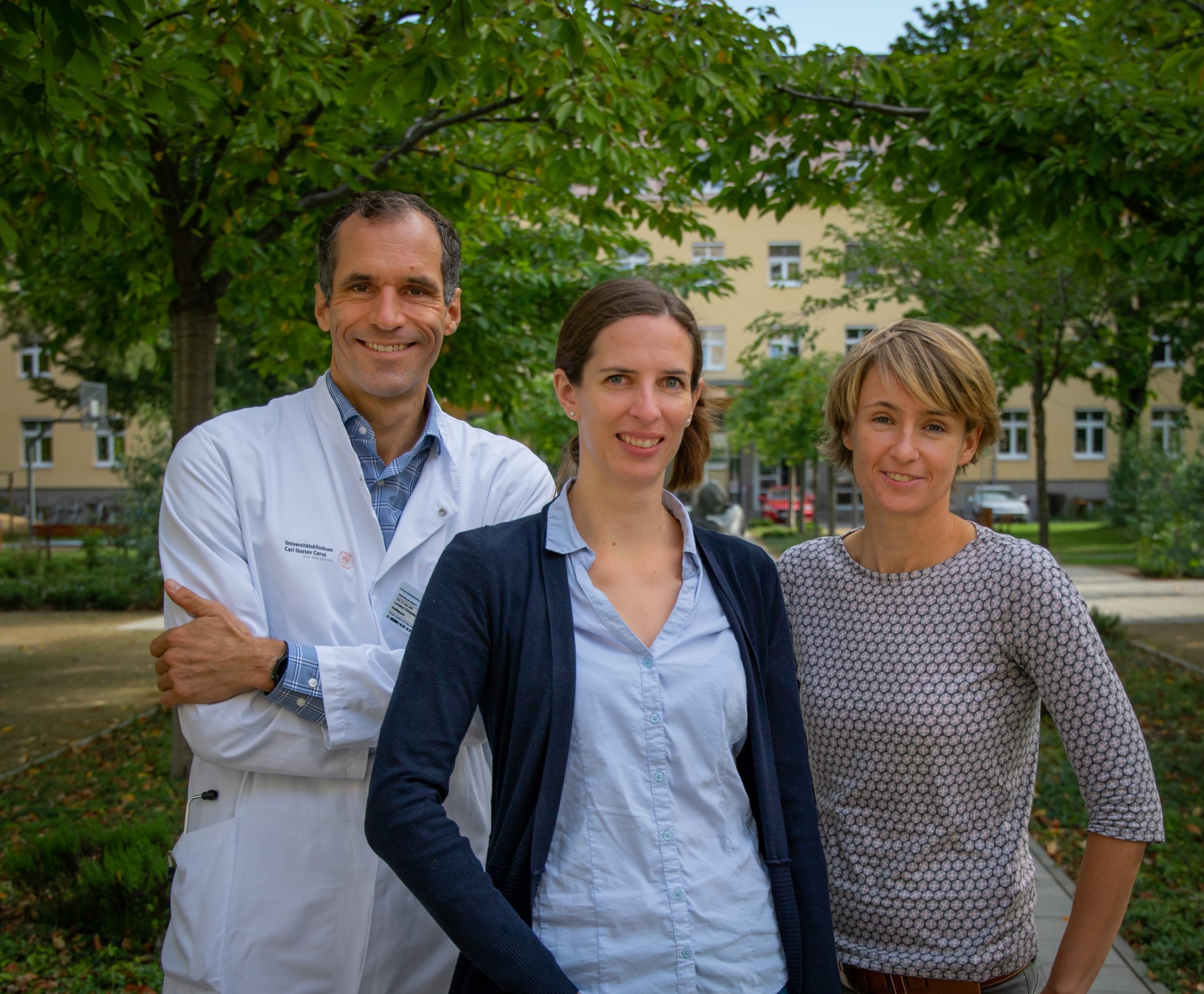 The trace element iron is essential for life. The liver is a central organ for iron homeostasis and maintains systemic iron levels in a narrow range that is optimal for human health. Iron deficiency is commonly the result of inappropriate uptake as in vegetarians or after chronic blood loss. The resulting iron-deficiency anemia is a common disease of the elderly. However, iron overload due to hematologic or genetic disorders is also detrimental for health and may damage a variety of organs, including the liver, the heart, the pancreas, and the testes. Also, bone is susceptible to iron alterations, since both iron deficiency and overload impair bone strength and promote fragility fractures.

The Deutsche Forschungsgemeinschaft is now funding The Research Unit „Role of iron metabolism in the osteohepatic axis“ (FerrOs) with 4.5 million € over four years. Professor Martina Rauner from the Bone Lab Dresden & the Center for Healthy Aging (Department of Medicine III) of the Universitätsklinikum Dresden coordinates this interdisciplinary consortium. The researchers try to decipher the fine-tuning of iron regulation between the liver and bone and clarify the role of hepcidin, ferroportin, and BMP signaling in this communication.

To this end, TU Dresden scientists cooperate with groups from Heidelberg, Münster, Ulm and Zürich in nine projects, five of which involve Dresden-based PIs, including Martina Rauner, Ulrike Baschant and Lorenz Hofbauer. With this program, the FerrOs group aims to obtain new insights into mechanisms of iron-related disorders and to develop novel dual therapies that concurrently target bone and liver diseases in patients in the future. 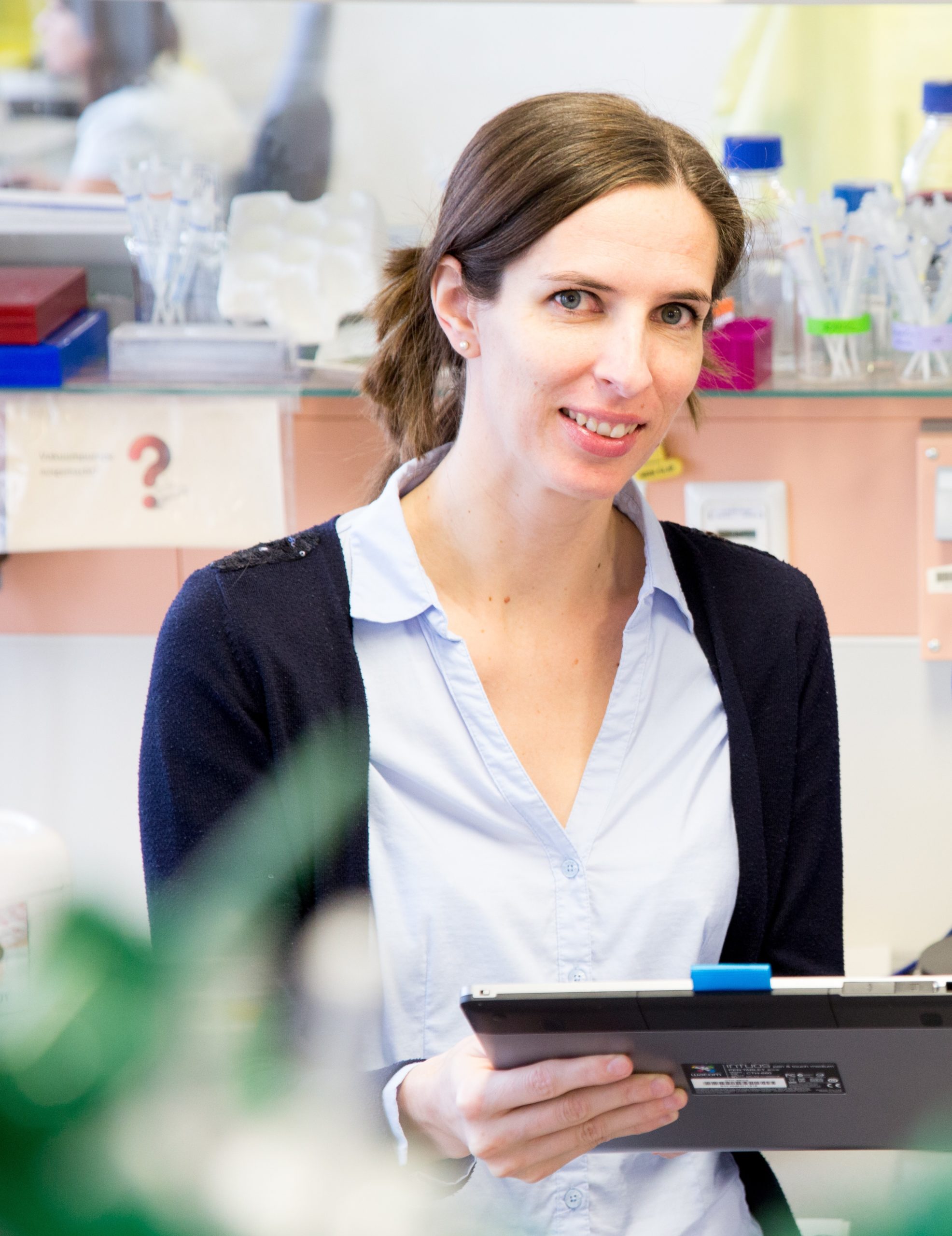 Martina received this year’s Fuller Albright Award! The award is given in recognition of meritorious scientific accomplishment in the bone and mineral field to an ASBMR member. The ASBMR thereby honours Martina’s studies on novel roles of multiple molecules involved in the Wnt signaling pathway across an array of conditions including metabolic, inflammatory, and malignant bone diseases.

Fuller Albright, M.D., was a much beloved investigator and teacher whose unparalleled achievements include significant contributions to the study of the renal effects of parathyroid hormone, estrogen use in osteoporosis, Vitamin D resistant rickets, and establishment of the Endocrine Unit of the Massachusetts General Hospital.